I'll Take Some Sushi on that Bagel 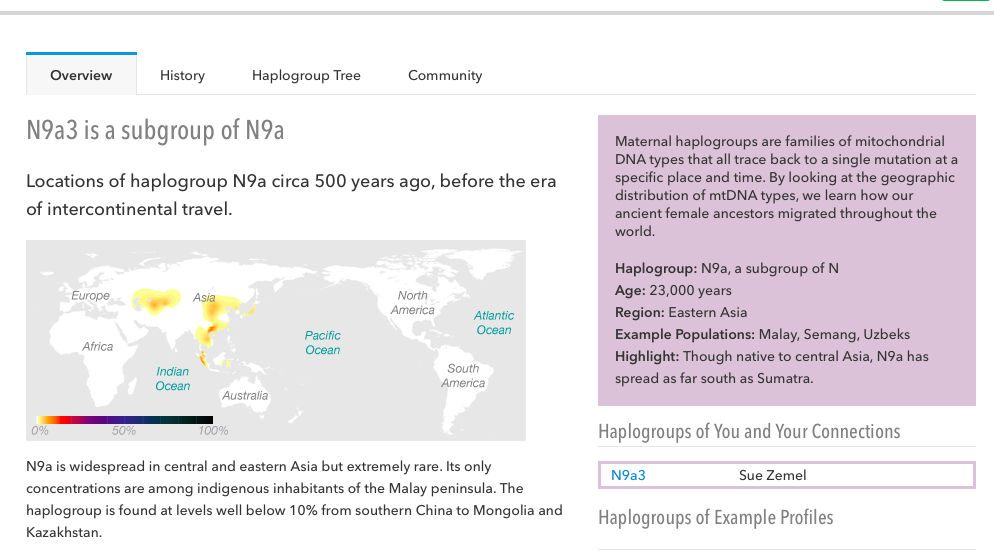 “Oh my god, you’re Asian!” Patricia declared, when the first result from 23andme, my Haplogroup, N9a3, arrived in my email “Your ancestral grandmother was Korean, Uzbek, or Mongolian. You’re Asian! I always thought you looked a bit exotic."

Asian? How could a Russian and Polish Ashkenazi Jew like me (my ancestry composition is 96.7% Ashkenazi with a little Southern and Eastern Europe thrown in), belong to a very rare family of mitochondrial DNA types that all traces back about 23,000 years to a single mutation found mainly among North and Northeastern Asian peoples, and some Slavic populations?  I thought my ancient people would have migrated from Africa, into the Middle East, then onto Europe.

Had someone at 23andme, a company that provides ancestry-related genetic reports and uninterpreted raw genetic data, switched my DNA-rich spit sample? Last year, the FDA made 23andme stop providing Health related reports indicating one’s risk of getting or carrying the gene mutation for various diseases and possible responses to drug therapies (the potentially important medical stuff), so I was suspicious.

So off I went researching on the Internet, only to discover that my ancient ancestors were part of the Ainu tribe, one of a “vanishingly rare” female line that developed 17,000 years ago in the area around Sakhalin,  Japan’s most northern island.  Russia invaded the island, and took Ainu women as slaves.  Throughout the 18th, 19th and early 20th centuries, Japan and Russia fought over Sakhalin, and most of the Ainu people were killed off.

Patricia immediately did an image search on women who are in the Haplogroup N9a3, and it returned a bunch of Korean and Japanese women and one blond Jewish woman, who it turns out, is a fairly serious genealogist who wrote an article about belonging to this group.

I even found a Facebook page called N9a3 that offered this hypothesis:

“Ashkenazi Jews, Central Asians (such as Uzbeks) and East Asians (such as Koreans) all share a common N9a3 origin linking back to a single woman who lived in Siberia at least 300 years ago - likely much earlier. Through this woman's children, her lines likely entered into the Ashkenazi gene pool either via a Lithuanian Tatar woman and an Ashkenazi man, or through the offspring of an Ashkenazi traveling merchant and a Siberian/Mongolian woman. Conversely, both Central Asian and East Asian peoples also have historical linkages to the vast regions of Siberia, which could explain why N9a3 is sometimes present in populations such as Koreans and Uzbeks.”

Patricia’s and Sophie’s results came in, and interestingly, they are both of similar ancestral composition (English, Irish, Scandinavian, and other European, in different percentages with Pat being a much higher percent Irish).  Patricia’s Haplogroup, a variation of my N group, also shows Eastern Asian ancestry along her mother’s line, and she’s still trying to figure out how her ancient people migrated to Ireland.  My dad often claimed that Patricia was his “love child.”  Who knows?

While all this ancestry stuff is pretty trippy, I have been more entertained by our reaction to the information.  I was doubtful at first, then very excited to claim my Asian roots. Pat has been compulsively searching the Internet, tracing back her family tree, as well as attempting to interpret her raw genetic data. She would like to have a second career as an epigeneticist.  Epigenetics is the study of changes in gene expression caused by certain base pairs in DNA or RNA being switched on or off through chemical reactions.  It’s complicated and most likely the way we will be fighting cancer in the future, as is using genetic data to predict increased risk of disease.

23andme is now working with FDA, and I expect that they will eventually offer the over 200 health reports that they initially provided consumers of their service, once they make it through all the red tape.  Accumulating all this genetic information (Medical Big Data) will undoubtedly produce more advances and increased understanding of the causes and treatment of disease.   So the next time 23andme pings me and asks me to take yet another online survey, I am going to do it, in the name of science, and in memory of my Mongolian grandmas!
Posted by Bits and Pieces: Sue Zemel at 1:51 PM